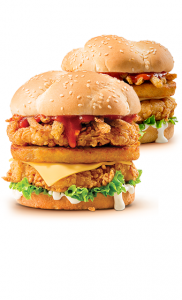 New Zealand: For a limited time only, KFC have introduced the Kumara Tower Stacker!

The burger contains one or two original recipe fillets, a golden kumara hash brown, tasty tomato mustard sauce, cheese and crispy onions. You can also change the fillet to a Zinger Fillet!

It’s available at participating stores for a limited time only. To take advantage of this deal and to locate your closest KFC store in New Zealand, click here. And if you’ve tried the deal, let us know in the comments!